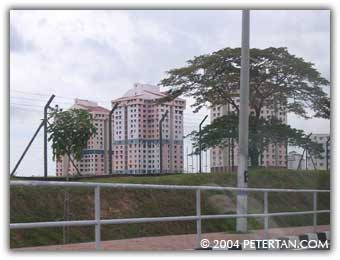 Taman Pekaka apartments viewed from Jalan Bukit Gambir.
This is an update to the issue of fire safety I brought up to the managers of my apartment. There was no reply to the letter I wrote to them regarding my concern. The Residents’ Association (RA) followed up the case with the management who were the developers also. They replied to the RA vaguely stating that they are not responsible for the safety of residents here and that the buildings were built according to plans approved by the authorities and the that fire protection systems are being maintained monthly by contractors appointed by them. They have built everything to specification and that was it. They were not willing to act on my concern. Instead they have asked the RA to organise fire drills together with the Jabatan Bomba dan Penyelamat to form fire-fighting teams for each apartment block. 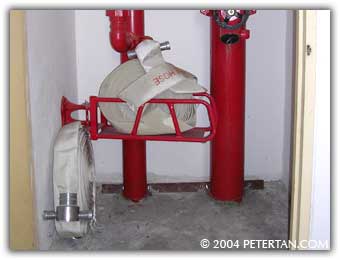 The fire hoses with the couplings intact.
In short, the developer cum building manager is saying that they own our apartments until the Strata Titles are issued. In the meantime, they can do whatever they want without the need to ask for our consent. That is exactly what they have been doing. Rightfully, parcel owners should be consulted when major expenditure has to be incurred. Can you believe that the developer withdrew more than RM200,000 from our sinking fund to purchase unit trusts without our knowledge or consent last year? Only when the RA filed police reports and complained to the Director of Land and Mines that the money was deposited into the fund again.

The developer charges RM4,000 monthly for their “management” services and another RM12,000 for employing security guards. It was understood that we are paying RM1,000 for each guard, six working the day shift and the other six working nights. Very often, there are three guards at the entrance and none at the individual blocks. This is worse during night time when less than six are found to be working. 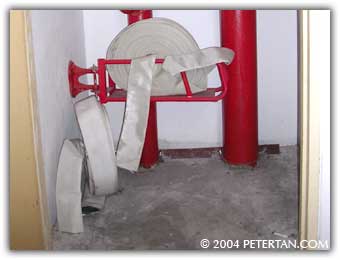 The fire hoses with the couplings missing.
That is not all. Residents have been complaining of missing shoes, cars being vandalised and tyres punctured. Just a few days ago, nozzles and couplings attached to the fire hoses for the wet riser were stolen from many floors of two blocks. This lax of security and missing crucial components of the fire-fighting equipment has truly put the safety of residents at risk. I dare not think what will happen should a fire break out and the fire hoses cannot be used

The management must realise that they should be working for us and not against us. Our complaints should be investigated and problems rectified. We complain not because we want to make trouble. Why should we cause trouble in the very place that we have called home? Arrogance and lack of forethought is not only working to the detriment of parcel owners and residents. It openly displays the lack of management skills and the irresponsibility on the part of the managers in looking after the interests of the very people that they are working for.