There were two mini bloggers meet at Mid Valley yesterday evening. Wuan and I were there for both. The first was with MataKecik and Suanie. We had lunch at Chopstick Noodles House. Wuan and I would like to thank MataKecik for the treat there. At the same time, I was very tempted to strangle Jaime and Suanie, if only I could, for having so much fun at my expense. And you two, I do not want to hear either of you humming the Ghostbusters theme song ever again in my presence, if you know what is good for your own safety.

The other meet was scheduled for 6.30pm. Mack and I were the early birds because we wanted to spend some time getting to know each other better. Mack noted that we are both an antithesis of each other. In many ways, we are at the opposite end of the scale in matters such as beliefs, ethnicity, coming from rival schools in Penang and the things we blogged about. Still, we discovered we could agree on many matters and work together on many issues. This is the wonder called Malaysia. 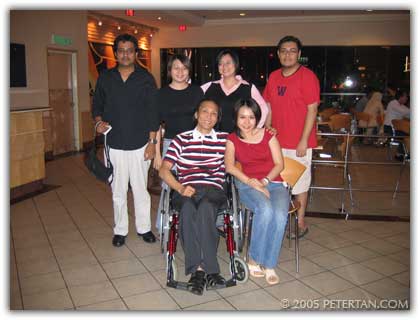 At the appointed time, we met Claire and lingered around Coffee Bean and Tea Leaf to wait for the rest of the bloggers to arrive. It was a surprise when a stranger came up to me and introduced himself. He was my neighbour from Penang, in KL for the weekend with his wife. We had been chatting through Yahoo Messenger for a few weeks now and that was the first time we met face to face even though we were just a hop away from each other. It was also at that time that I learnt how popular Claire is. Before I could actually introduce her, my neighbour already knew who she is.

When all the attendees arrived, we proceeded for the BBQ Buffet at the Cititel Coffee House. There was Paul Tan with his forever blur look. I took a good look at him this time and realized that he has got pretty eyes. Suanie, she was very quiet during the first half of the meeting, quietly chowing down her food, her face flushed, a total opposite from the time we met for lunch. 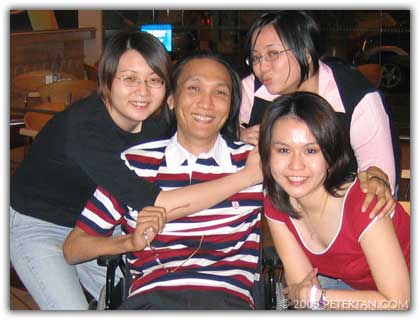 Anybody who has read Lainie’s blog will think that she is a riot in real life too. That was not to be the case. She was very well-mannered, soft-spoken and polite. The next time we meet, I am going to ask for a hug from her. She looked so cute and cuddly. Claire sat beside me and this woman can eat! I cannot even remember how many slices of salmon she had. And boy, can she talk too. I guess that is where all the extra calories went to. Likewise, Mack is a glutton but he has honed the art of buffet eating into a fine art. He should write a book on that. He could actually fill up all the unutilized gaps in his stomach with more food. Scary! 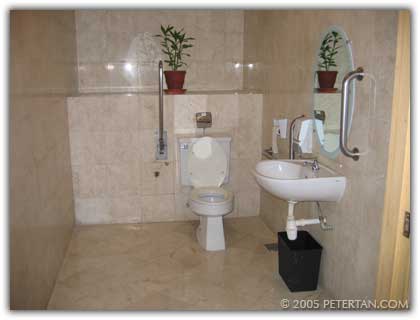 As usual, I would need to use the toilet every three hours. Cititel Mid Valley has one of the nicer toilets for PWDs. It was well-lit with dry floor and clean. The door was extra wide. Although it was fitted with a door knob I could actually turn it easily to get out. And as usual, I would get inconsiderate people who attempted to use the toilet even though I was inside and they were not disabled. I was very tempted to run wheel myself out with my pants down to confront the culprit when he repeatedly turned the knob even though I had politely informed him from behind the door that the toilet was occupied.

Nevertheless, I had a nice time sharing views with my fellow bloggers. Reading their blogs were fun. To be able to interact with them in real life was even more interesting. I always look forward to such meets and I certainly am looking forward to the Mid Valley Bloggers Meet II next week.