Order to Malaysia Airports and AirAsia: Ease movement of the disabled 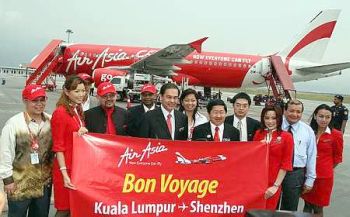 “I had a dialogue with representatives of the disabled community and fully agree that some kind of facilities should be provided to ease their movement,” said Transport Minister Datuk Seri Chan Kong Choy.

“I have given instructions that something has to be done; I want to see solutions and want both parties to work things out,” he said, adding that upgrading of facilities at the Low-Cost Carrier Terminal (LCCT) had taken place gradually, such as the construction of covered walkways.

He was commenting on the disabled community’s complaints against AirAsia and the LCCT after launching the inaugural AirAsia flight from Kuala Lumpur to Shenzhen, China, in Sepang yesterday.

The main complaint by the Barrier-Free Environment and Accessible Transport Group was AirAsia’s refusal to take passengers who were completely immobile, suggesting that the carrier review its policies to provide facilities that were non-discriminatory.

On passengers being stranded at the Kuala Lumpur International Airport (KLIA) due to overbooking of flights by Malaysia Airlines (MAS) last Sunday, Chan said he was waiting for a full explanation from MAS.

Stating that they would have to change the whole configuration of their planes to accommodate totally paralysed passengers, Fernandes added that it was not feasible.

He said that for such passengers, the aisles and the toilets would have to be bigger.

“For wheelchair-bound passengers, we do not charge them for the wheelchair but take them to the plane and physically carry them into the plane,” he said.