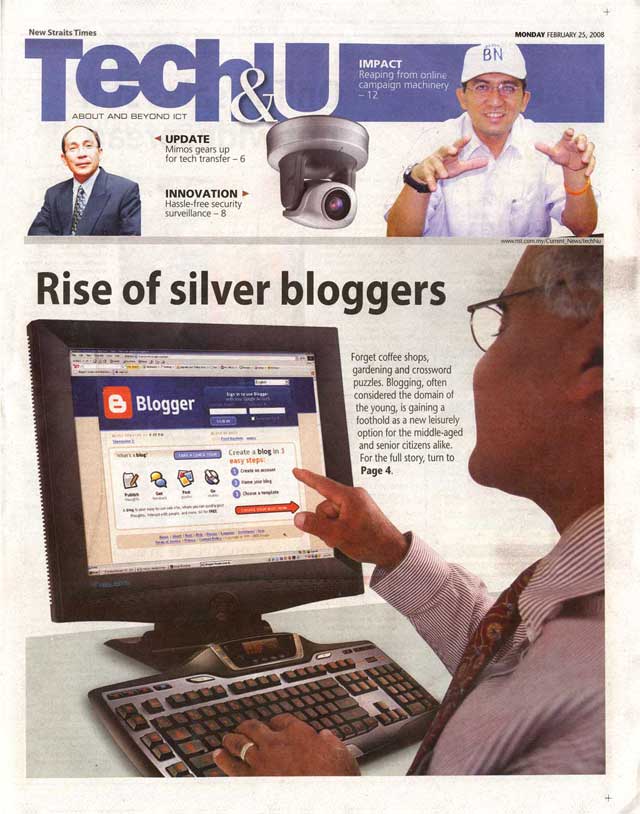 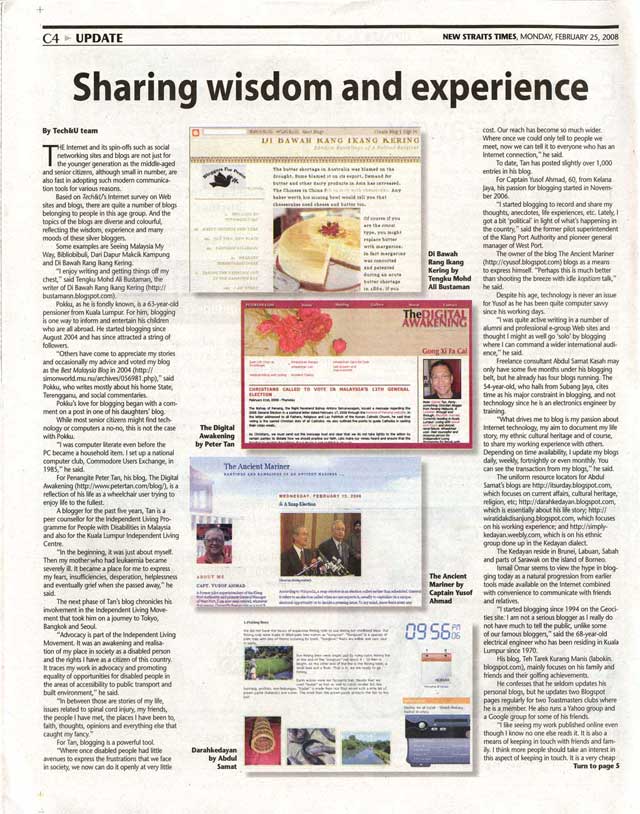 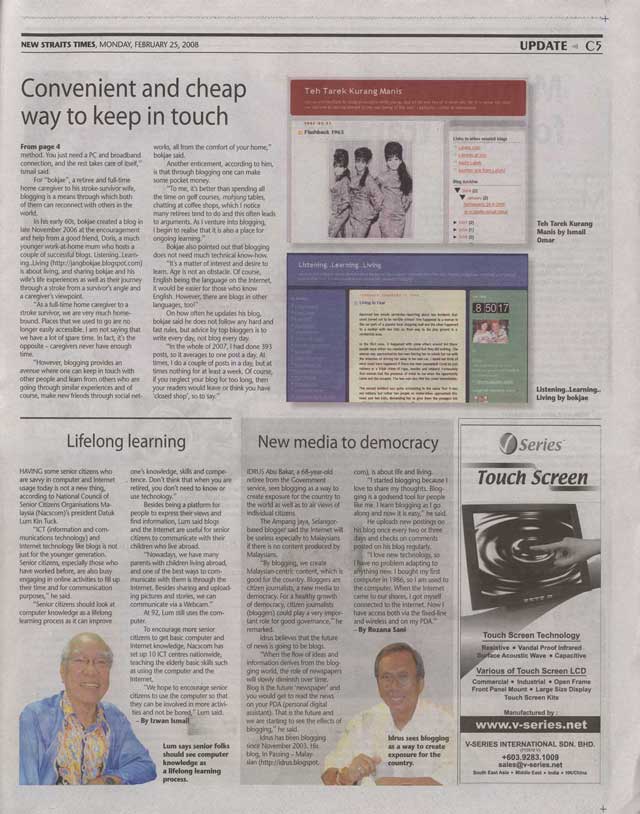 Forget coffee shops, gardening and crossword puzzles. Blogging, often considered the domain of the young, is gaining a foothold as a new leisurely option for the middle-aged and senior citizens alike.
insidepix1

THE Internet and its spin-offs such as social networking sites and blogs are not just for the younger generation as the middle-aged and senior citizens, although small in number, are also fast in adopting such modern communication tools for various reasons.

Based on Tech&U’s Internet survey on Web sites and blogs, there are quite a number of blogs belonging to people in this age group. And the topics of the blogs are diverse and colourful, reflecting the wisdom, experience and many moods of these silver bloggers.

“I enjoy writing and getting things off my chest,” said Tengku Mohd Ali Bustaman, the writer of Di Bawah Rang Ikang Kering (http://bustamann.blogspot.com).

Pokku, as he is fondly known, is a 63-year-old pensioner from Kuala Lumpur. For him, blogging is one way to inform and entertain his children who are all abroad. He started blogging since August 2004 and has since attracted a string of followers.

“Others have come to appreciate my stories and occasionally my advice and voted my blog as the Best Malaysia Blog in 2004 (http://

Pokku’s love for blogging began with a comment on a post in one of his daughters’ blog.

While most senior citizens might find technology or computers a no-no, this is not the case with Pokku.

“I was computer literate even before the PC became a household item. I set up a national computer club, Commodore Users Exchange, in 1985,” he said.

For Penangite Peter Tan, his blog, The Digital Awakenin (http://www.petertan.com/blog/), is a reflection of his life as a wheelchair user trying to enjoy life to the fullest.

“In the beginning, it was just about myself. Then my mother who had leukaemia became severely ill. It became a place for me to express my fears, insufficiencies, desperation, helplessness and eventually grief when she passed away,” he said.

The next phase of Tan’s blog chronicles his involvement in the Independent Living Movement that took him on a journey to Tokyo, Bangkok and Seoul.

“Advocacy is part of the Independent Living Movement. It was an awakening and realisation of my place in society as a disabled person and the rights I have as a citizen of this country. It traces my work in advocacy and promoting equality of opportunities for disabled people in the areas of accessibility to public transport and built environment,” he said.

“In between those are stories of my life, issues related to spinal cord injury, my friends, the people I have met, the places I have been to, faith, thoughts, opinions and everything else that caught my fancy.”

For Tan, blogging is a powerful tool.

“Where once disabled people had little avenues to express the frustrations that we face in society, we now can do it openly at very little cost. Our reach has become so much wider. Where once we could only tell to people we meet, now we can tell it to everyone who has an Internet connection,” he said.

To date, Tan has posted slightly over 1,000 entries in his blog.

For Captain Yusof Ahmad, 60, from Kelana Jaya, his passion for blogging started in November 2006.

“I started blogging to record and share my thoughts, anecdotes, life experiences, etc. Lately, I got a bit ‘political’ in light of what’s happening in the country,” said the former pilot superintendent of the Klang Port Authority and pioneer general manager of West Port.

The owner of the blog The Ancient Mariner (http://cyusof.blogspot.com) blogs as a means to express himself. “Perhaps this is much better than shooting the breeze with idle kopitiam talk,” he said.

Despite his age, technology is never an issue for Yusof as he has been quite computer savvy since his working days.

“I was quite active writing in a number of alumni and professional e-group Web sites and thought I might as well go ‘solo’ by blogging where I can command a wider international audience,” he said.

Freelance consultant Abdul Samat Kasah may only have some five months under his blogging belt, but he already has four blogs running. The 54-year-old, who hails from Subang Jaya, cites time as his major constraint in blogging, and not technology since he is an electronics engineer by training.

“What drives me to blog is my passion about Internet technology, my aim to document my life story, my ethnic cultural heritage and of course, to share my working experience with others. Depending on time availability, I update my blogs daily, weekly, fortnightly or even monthly. You can see the transaction from my blogs,” he said.

The Kedayan reside in Brunei, Labuan, Sabah and parts of Sarawak on the island of Borneo.

Convenient and cheap way to keep in touch

Ismail Omar seems to view the hype in blogging today as a natural progression from earlier tools made available on the Internet combined with convenience to communicate with friends and relatives.

“I started blogging since 1994 on the Geocities site. I am not a serious blogger as I really do not have much to tell the public, unlike some of our famous bloggers,” said the 68-year-old electrical engineer who has been residing in Kuala Lumpur since 1970.

His blog, Teh Tarek Kurang Manis (labokin.blogspot.com), mainly focuses on his family and friends and their golfing achievements.

He confesses that he seldom updates his personal blogs, but he updates two Blogspot pages regularly for two Toastmasters clubs where he is a member. He also runs a Yahoo group and a Google group for some of his friends.

“I like seeing my work published online even though I know no one else reads it. It is also a means of keeping in touch with friends and family. I think more people should take an interest in this aspect of keeping in touch. It is a very cheap method. You just need a PC and broadband connection, and the rest takes care of itself,” Ismail said.

For “bokjae”, a retiree and full-time home caregiver to his stroke-survivor wife, blogging is a means through which both of them can reconnect with others in the world.

In his early 60s, bokjae created a blog in late November 2006 at the encouragement and help from a good friend, Doris, a much younger work-at-home mum who hosts a couple of successful blogs.

Listening..Learning..Living (http://jangbokjae.blogspot.com) is about living, and sharing bokjae and his wife’s life experiences as well as their journey through a stroke from a survivor’s angle and a caregiver’s viewpoint.

“As a full-time home caregiver to a stroke survivor, we are very much home-bound. Places that we used to go are no longer easily accessible. I am not saying that we have a lot of spare time. In fact, it’s the opposite – caregivers never have enough time.

“However, blogging provides an avenue where one can keep in touch with other people and learn from others who are going through similar experiences and of course, make new friends through social networks, all from the comfort of your home,” bokjae said.

Another enticement, according to him, is that through blogging one can make some pocket money.

“To me, it’s better than spending all the time on golf courses, mahjong tables, chatting at coffee shops, which I notice many retirees tend to do and this often leads to arguments. As I venture into blogging, I begin to realise that it is also a place for ongoing learning.”

Bokjae also pointed out that blogging does not need much technical know-how.

“It’s a matter of interest and desire to learn. Age is not an obstacle. Of course, English being the language on the Internet, it would be easier for those who know English. However, there are blogs in other languages, too!”

On how often he updates his blog, bokjae said he does not follow any hard and fast rules, but advice by top bloggers is to write every day, not blog every day.

“In the whole of 2007, I had done 393 posts, so it averages to one post a day. At times, I do a couple of posts in a day, but at times nothing for at least a week. Of course, if you neglect your blog for too long, then your readers would leave or think you have ‘closed shop’, so to say.”