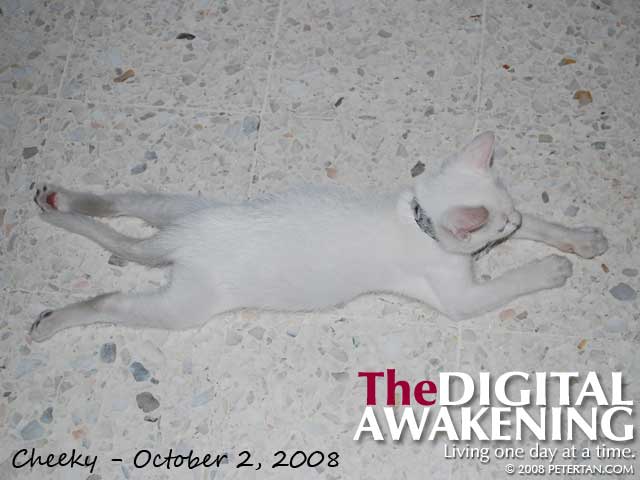 Wuan has been feeding Cheeky steamed fish for a while now. He loves it very much. In fact, he prefers it over wet kitten food and kitten biscuits. This is a shot of him resting after a very full meal. His tummy is all rounded. He usually has a good appetite. I am happy to see him growing up nicely.

There was a time when I accidentally rolled on him with my wheelchair. It was just a few days after we took him home with us from Ipoh. Like the other kittens before him, Cheeky liked to climb onto my wheelchair cargo net to rest. I was going to the toilet when he suddenly jumped out. I knew I had rolled on something when I heard a squeal and saw him scampering away in a flash to hide behind the sofa. There was cat poo on the floor too.

He did not come out when I called out to him. I was distraught because I thought I had mortally wounded him. It was a relief when he finally came out from hiding when Wuan got home a few hours later. He was mewing away as if to complain about what I did to him. He did not seem to be injured and ate well after that. The vet has also checked him and gave him an excellent bill of health. It took him a while before he dared to climb onto the cargo net again. I have also learnt to be more cautious whenever he is around.

Just yesterday, he learned to climb onto my lap when I was at the worktable. He would climb onto the sub-woofer box that was just beside the wheelchair and then onto my lap asking to be stroked and pampered. He did this again today. This little fur ball is getting more adorable by the day. It is especially a joy to watch him play with Fei Por where he would pounce on her while she would ignore his playful attacks and groomed him nonetheless.

2 thoughts on “All Stretched Out”