It was durian season in Penang last month. Wuan and I were at the island from 24th to 27th June to savour some of it. We had been looking forward to this trip for a while already. Unfortunately, we arrived at the tail-end of the season. The supply of good quality durians were diminishing and had become extremely expensive. 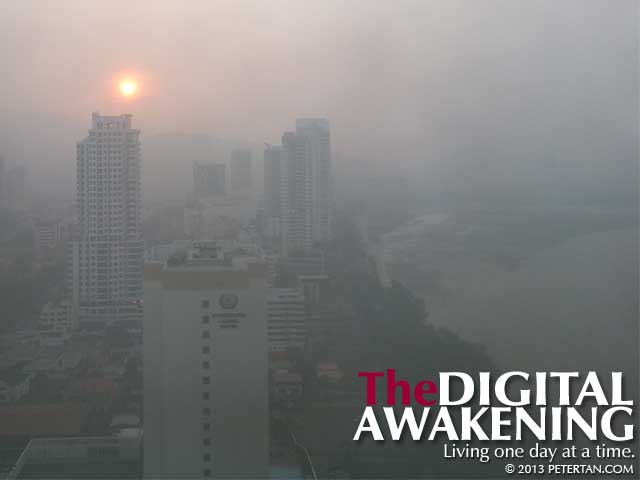 We noticed that Penang was as hazy as the Klang Valley when we crossed the bridge. First order of the day upon reaching the island was to head straight to the Batu Lanchang Market food court to tapau some delicious hawker food to eat at the hotel. I was famished. So I got Wuan to buy freshly squeezed sugar cane juice, Mamak mee goreng and popiah for me. I could have eaten more but I was saving it for the durian feast on the next day. 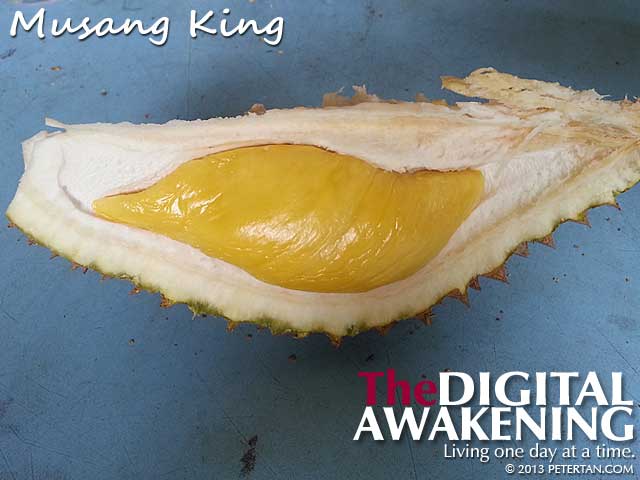 We roped Bryan in to join us for the durian feast so that we could try a few more varieties. Between Wuan and I, we could only eat two to three medium sized fruits at one go. We had booked the durians from Ah Wong he day before to reserve three durians.

We had Ang Heh, Hor Lor and Cheh Puay. Those were some of our favourites. We were still not satiated after that and asked for another. He had one Musang King left and so we go him to open it for us. That was Wuan’s and my first time savouring this cultivar. It had all the hallmarks of a good quality durian – pleasantly sweet, pungent with moist and soft but not mushy flesh.

While it was a “ho bak liulian”, a Hokkien phrase conferred on durians of good quality, the Musang King has no distinct characteristics to make it stand out like Cheh Puay or Hor Lor. It was just delicious among the delicious. Perhaps, I am biased. I may just try it again on as an opener to see if the three earlier fruits had affected my taste and opinion. 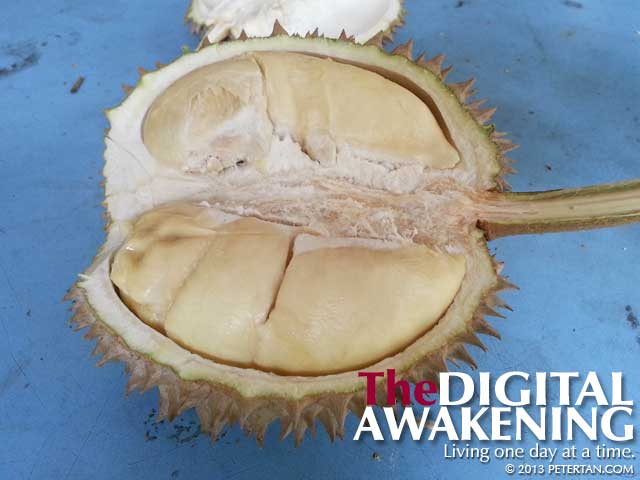 We asked Ah Wong for another durian because we felt there was just a wee little space in our stomach for a last one. He opened a no-name old tree kampung durian. The sight of the pale cream flesh belied what our taste buds discovered. It was moderately sweet, “koh liam” (bitter) with very sticky flesh. We had to wash it down with some water after a few mouthfuls.

Durians like this cost a fraction of those popular ones. To me, the colour of its flesh is the least important aspect of a durian although an “ang bak liulian” (ref-fleshed durian) is usually more favoured and carries a premium. The texture, pungence and taste are better yardsticks.

Satisfied, full and happy, we took a slow drive back using the Pondok Upeh – Teluk Kumbar – Bayan Lepas route. The windy stretch from Pondok Upeh to Teluk Kumbar was being widened and flyovers constructed to make it less windy. After dropping Bryan off, we went to the Inner City. Wuan had always wanted to shoot the sculptures and murals that have been appearing around the old city.

Other than that, we did not do much during this trip. It was supposed to be a holiday. We did not want to stress ourselves out by scampering all over the place. We got treated to dinner by friends on two subsequent nights. Thank you to Ee Yean, and Bryan and Angeline. The food was made more delicious by your company. Ah Wong’s wife also told us that there is another durian season in August. We may make another trip again just for that.