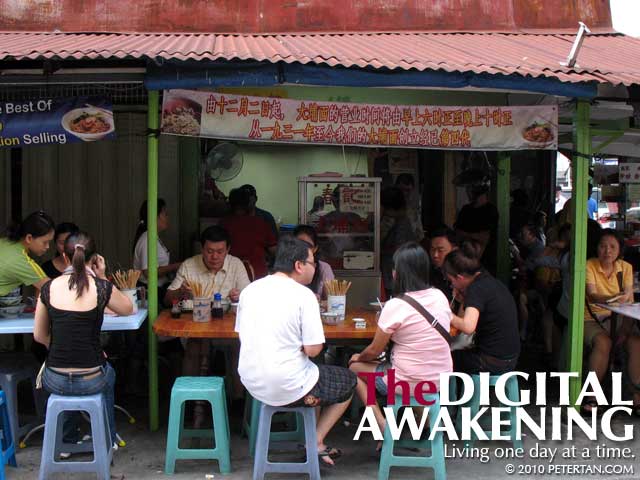 I woke up early last Saturday. Well, waking up at 9 am is early for me on weekends. Wuan was about to go to the Pudu market to buy shrimps for the arowana. Since I was already awake, I offered to drive her. As we circled around to look for parking, we got hungry. Wuan suggested that we check out the Hakka noodles at Jalan Sayur. I readily agreed since I did not get to taste the noodles from this seemingly popular stall the last time we were there.

The stall shares the end lot with a few other stalls in a row of zinc roofed shops by the junction of Jalan Sayur and Jalan Pudu. These shops must have been there for as long as anyone can remember. They are what food courts are like 80 years ago. Two banners, one in Chinese the other English, hanging from the roof inform customers that they are opened from 6 am to 10 pm and tells a brief history of the stall. They have been selling hakka noodles since 1931 and that the fourth generation is running the business now.

While it is popularly known as hakka noodles, the yellow-coloured signboard at the shop says “Da Pu Mian”. The Chinese characters on the glass surface of the stall says “Chun Ji Da Pu Mian”. “Chun” is the name of the stall, usually the owner’s. The suffix “ji” denotes that it is an eatery. “Da Pu” is a town in the Guandong Province in China with a predominant Hakka population. “Mian” means noodles. This place is so rich in heritage that its history is worth chronicling, especially the stalls that have been operating in the same location for nearly one century already. 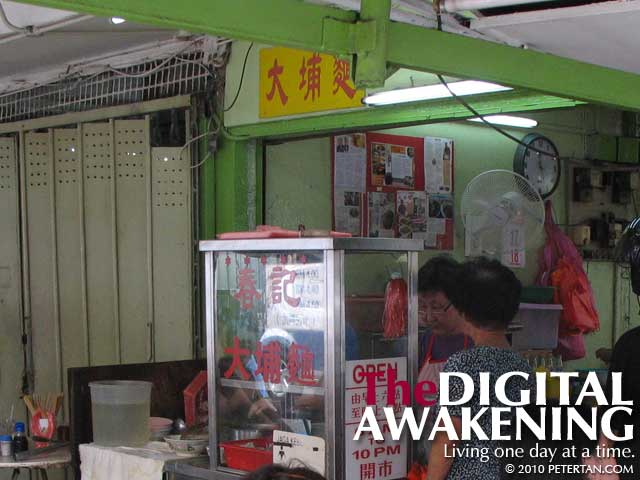 There were several groups of young people mingling around the stall. I thought they were waiting in queue. I did not fancy waiting for thirty minutes again. It turned out that there was a tuition centre nearby and the group of teenagers were waiting for their classes to begin. Wuan spotted an empty table right beside the stall and we quickly made our way there.

While I settled down, Wuan went to stand in line to order. One of the helpers told Wuan that he would come to the table to take our orders. Anticipating a long wait, Wuan went off to the market to buy the shrimps. From where I was, I could observe the activity of the middle-aged couple manning the stall. The man cooked the noodles while the woman added minced meat, char siu and vegetables to complete the orders.

I was impressed with the couple’s memory as they both could remember at least ten orders in succession and prepare them accordingly. First, one could order small, medium or large portions of either noodles or lou shi fun. Some of the customers wanted extra mince meat while others wanted extra wantans. All those they could remember. While they were taking orders, their hands never stopped working. 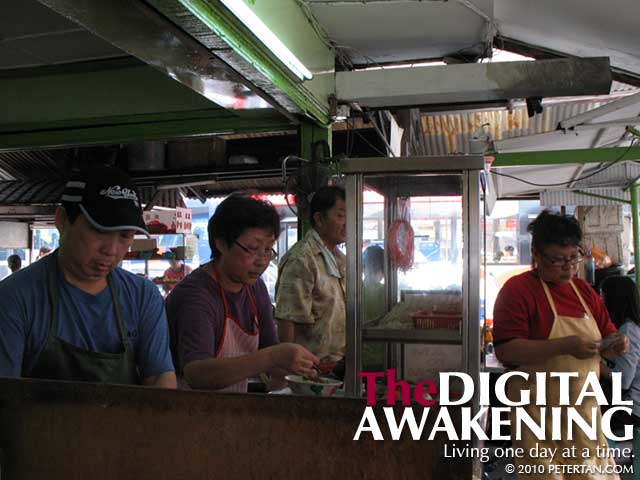 There was an unending stream of customers queuing up for take-away and a similar queue of customers waiting for tables. After a twenty-minute wait, the man cooking the noodles asked for my order. Five minutes later, our two small portions came with a bowl of three wantan dumplings each. Minced pork and char siu were piled on top of the noodles together with choy sum and garnished with spring onion. It was a pleasant surprise when I found some bak eu pok (crispy pork lard) together with the minced meat. The little bits of crispy pork lard enhanced the taste and aroma of the noodle.

A small portion of noodle costs RM4.00, medium RM4.40 and large RM4.60. I would say the price is reasonable. Wuan and I were pretty full afterwards. The half-hour wait was worth it. The noodles, minced pork, char siu and wantan dumplings were all nicely done. The plus point is that the place is accessible by wheelchair from the car park although there is no accessible parking. By the way, parking at Jalan Sayur costs RM2 per entry. I am definitely going back for seconds and thirds and more. No doubt about that. 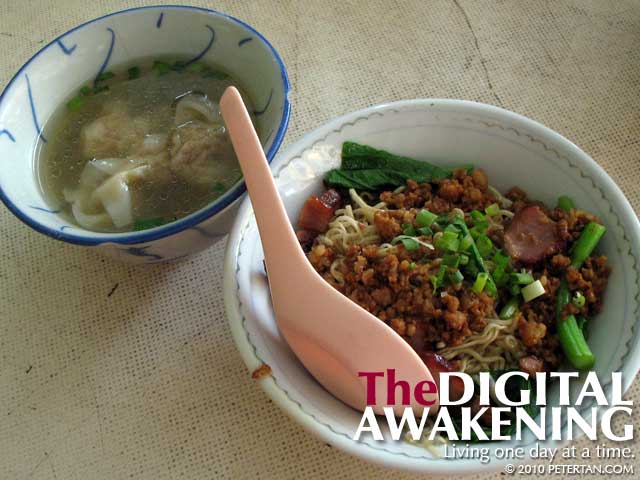 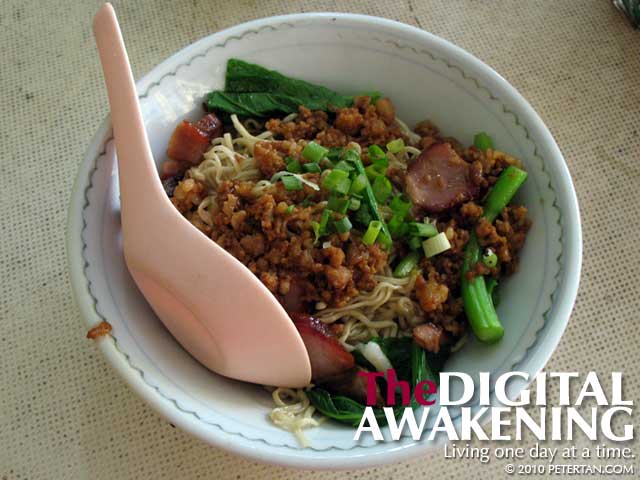 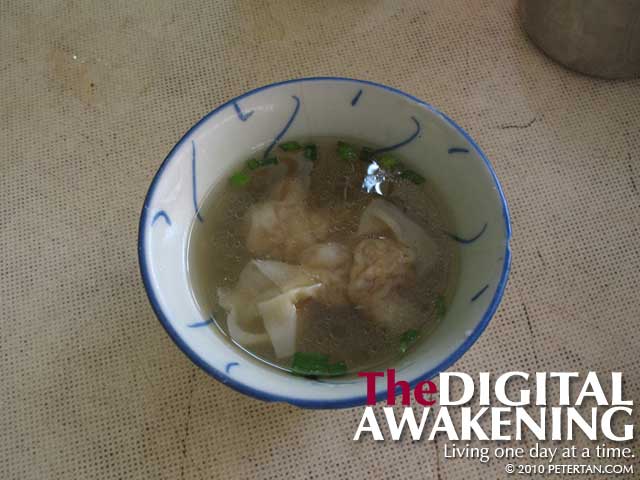 The bowl of wantan dumplings that came with the Hakka noodles at Choon Kee.

Wuan and I went to Jalan Sayur in Pudu for the first time, first time for me that is. Apparently, there are some delicious food to be had there, especially in the evening. We tried to look for the place but got lost the day before. I was not too keen at parking illegally at Jalan Pudu. We used the GPS device to guide us the next day. We were directed to turn left into a back lane right after the Jalan Pudu – Jalan Pasar traffic lights. That led us to a car park next to Jalan Sayur. 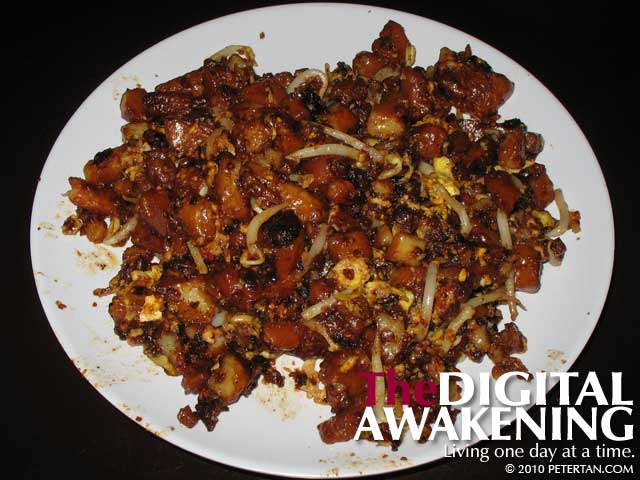 The char koay kak stall, which opens only in the evening, had a long queue despite the strong stench emanating from the waste container right behind the stall. It was a 30-minute wait. Wuan ordered the large portion with egg. It came with the usual ingredients of bean sprouts and minced chai por (preserved radish).

Truth be told, I was not impressed. Perhaps, the stench messed up my olfactory senses and taste buds. Moreover, the koay kak, literally meaning rice flour cubes, were more crumbs than cubes. That made it difficult to pick up with the chopsticks.

We wanted to eat the eggs steamed with fresh milk but they were already sold out by 7 pm. When we go there next, the other food we want to sample are the fried chicken, chee cheong fun, wu tau kou (yam cake) and hakka noodle. The stalls serving these popular hawker fares had equally long queues.

We will be having another go at the char koay kak again, this time hopefully the malodour is less overpowering and the queue is shorter, just to see if our taste buds were mistaken. Surely it must be delicious enough for people to be willing to stand in line for 30 minutes. I have not seen a queue this long for a while already. That is also because I have not been to places like this in a long time. 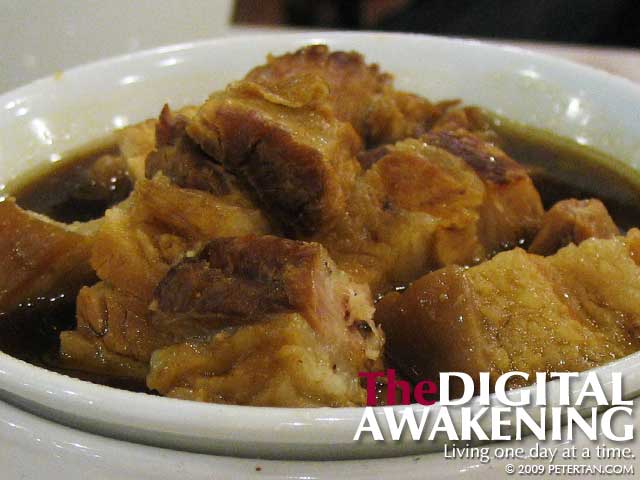