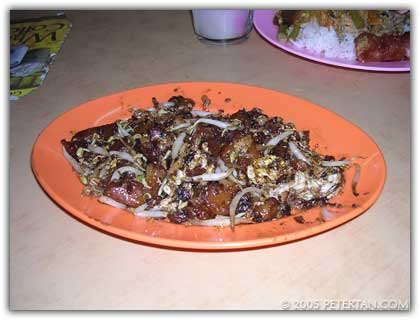 Penang is famous for its hawker food. The dishes do not taste the same everywhere and the ingredients used may differ too. Therefore it takes a little hunting to get ones that are nice and relatively inexpensive. I usually do not patronise the more popular spots like Swatow Lane, Lorong Selamat or Gurney Drive because they are over-rated and more expensive than other places in the island. 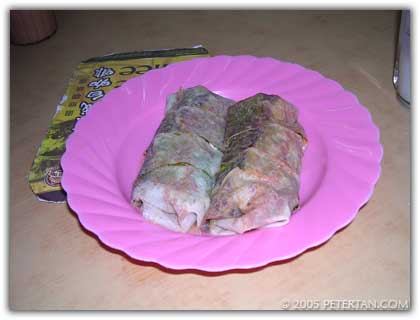 The food court at the Batu Lanchang incidentally is wheelchair friendly and parking spaces are in abundance. Whenever I am around the vicinity and looking for food, I would invariably stop there. Among my favourites there are the koay kak, popiah, che hoo and ais kacang. 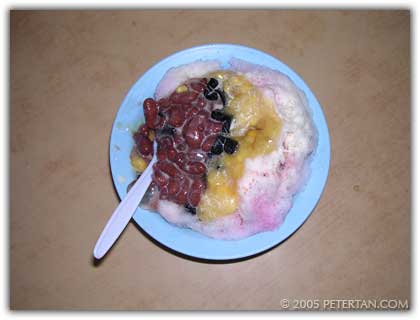 With this brief introduction of some of my favourite Penang hawker food, I am passing the baton to Minishorts. Thank you all for spending time here accompanying us throughout the Blogathon. For those who have not pledged, please do so now. This is all for a good cause. May God bless you all for your kindness.

* The entry was posted at Bloggers are Morons for Blogathon 2005. 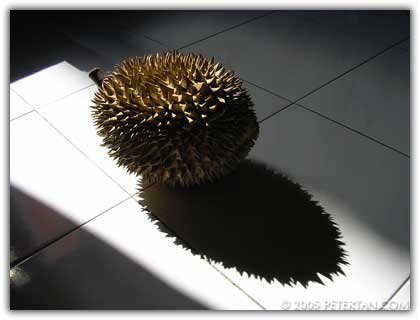 Wuan and I love durians. Between the two of us, we could eat countless durians in one sitting at the durian stall in Balik Pulau. I used to eat durians for breakfast, lunch, tea, dinner and supper. My dietary restrictions now have put a death knell to this gluttony. I have written about this King of Fruits a few years ago together with a doggerel dedicated to Wuan. I would like to share it here.

The durian is a rather unique fruit. It resembles more to an intimidating weapon that can inflict serious bodily injuries than a prized fruit. Its skin consists of short stubby thorns covering the entire fruit, with colours that vary from brown to green to yellowish. Its size can range from a small coconut to a very large watermelon.

The durian drops from the tree when it ripens. A ripe durian emits an odour, which to the uninitiated, reeks. It can be overpowering to the point of being nauseating. To the durian lover, its aroma is enough to make one drool.

There are several ways to open a durian. The durian seller cuts a small notch on the bottom with a very sharp knife and then pries it open with both hands. At home, prying with a very large kitchen knife usually opens the durian. Sometimes, a sharpened wooden stake is used instead.

Its flesh, which covers a seed, is encapsulated in several compartments within. The colours vary from light cream to yellow to orange to dark pink. A pink-fleshed durian would command a premium over a pale-fleshed one. Different durians taste different. Some are sweet and creamy while others are bitterly sweet.

The price of a reasonably good durian varies from RM5 up to RM50 per fruit, depending on its aroma, taste, flesh texture and scarcity. A low-yield harvest season would invariably increase the price while a bumper harvest will see the price plummeting to as low as 50sen per fruit.

Durians are given names, such as Red Prawn or D2, for easy identification. A real connoisseur would know a durian just by its thorns, smell or taste. However, soil, terrain and weather of different localities subtly changes the aroma and taste.

The durian is seasonal according to locality. Durians in one region may be ripe while in another, its flowers may just be blooming. In Penang island, several areas are famous for durian cultivation, namely Balik Pulau, Sungai Pinang, Paya Terubong, Relau and Teluk Kumbar.

Balik Pulau and Sungai Pinang durians are much sought after as these areas have some of the oldest durian trees in Penang. Durians from older trees are preferred, as its flesh texture is smoother and its aroma richer as compared to fruits from younger trees. Some of the trees here date back to the early 20th century.

Durians can be made into pastry, locally known as durian cake. Making the durian cake is a tedious process. The flesh is removed from the seed and then sifted for impurities. Sugar is added. It is then continuously stirred in a pot for 4 hours over a slow fire until it thickens and turns dark brown.

The durian can also be eaten with glutinous rice cooked in coconut milk or just plain white rice. The more adventurous will make a durian broth of green beans and coconut milk. The Malays like to eat it fermented. This fermented durian, called the tempoyak, smells even more pungently potent.

The durian skin is not wasted. Its ash is mixed with water to produce an alkaline solution. It is then used for making kee chang – a dumpling of glutinous rice mixed with the durian alkali. It is wrapped in bamboo leaves and steamed for several hours. It has a slightly tangy taste and is eaten with coconut sugar.

The durian is indeed the King of Fruits. Its menacing exterior belies the ambrosia within. Its sharp thorns are not a deterrent. Every year, the locals await the durian season in anticipation. A small fortune is spent in indulging on its pungently delicious flesh. If there ever were food fit for the Gods, durians would be it – to the durian lovers, at least.

Open it with an axe or a knife
It is just like a honeybee’s hive
To risk life, limb and injury
For a taste of this pungent savoury

Thus is my doggerel of the king of fruits
It rhymes, it sucks, and it is crude
Hey, but if you have tasted the durian
You’d know I was telling the truth, my friend.

* This entry was posted at Blogger are Morons for Blogathon 2005. 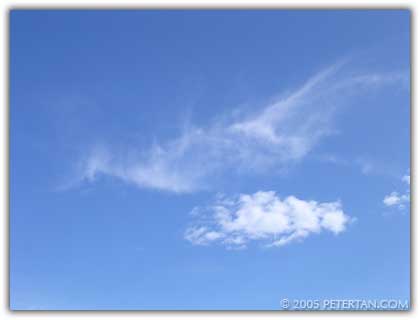 Clouds are graffiti in the sky. I have always been fascinated by their white and fluffy and constantly changing forms. On those slow days when I do not feel like doing any heavy thinking, I would sit by the window and look out at the sky. Sometimes, these puffs of water vapour seemed so close that I could almost reach out and grab them. Cloud watching brings out the child in me. I can happily sit there for hours just watching them drift by.

* This entry was posted at Bloggers are Morons for Blogathon 2005.