The durian season in Balik Pulau is in full swing. Wuan scheduled her leave especially to coincide with this event. We had for company during the four-day sojourn in Penang our best friends William and Cynthia and their lovely kids Emily and Henry. We drove up from Kuala Lumpur on Thursday and enjoyed the best of Balik Pulau durians, Penang hawker food, crazy traffic jams and mad drivers. 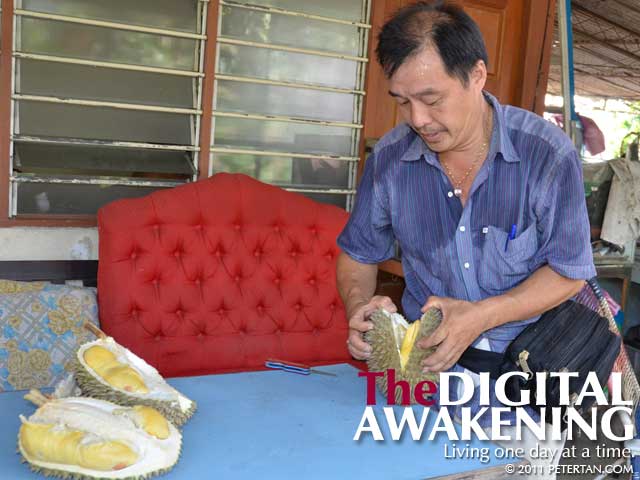 Three days prior to the trip, I had booked four durians from Ah Wong who runs the 808 stall opposite the Balik Pulau bus terminal. While durians are aplenty, the “ho bak” (good quality) durians are usually snapped up as they come in from the plantation. Wuan and I have been patronising Ah Wong for many years as we are related in some ways and are sure to get the best he has. Ah Wong is very deft in opening durians with just a pen knife. A few cuts to the bottom of the thorny fruit and the glory of the yellow flesh is quickly revealed. 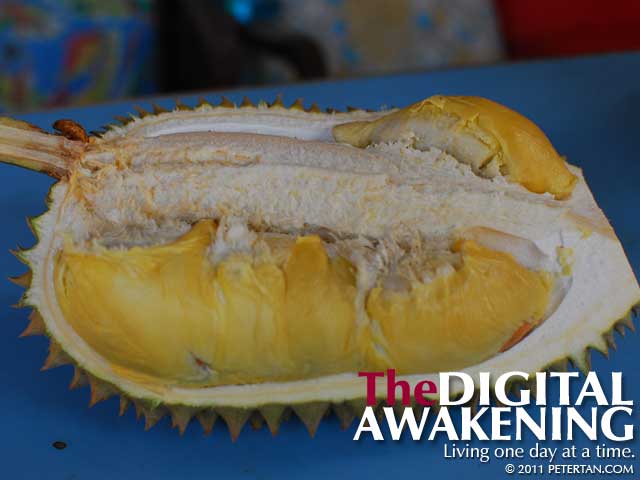 The first durian that Ah Wong opened for us was Lin Feng Jiao, named after the famous Taiwanese actress of the 1970s. Why it was named so, I did not ask. Perhaps, the actress was the first thing that came to mind when this durian was being savoured. I certainly did not have that impression. It was a rather large fruit with firm and sticky flesh, so sticky that one cannot eat too many seeds without having to drink some water in between. 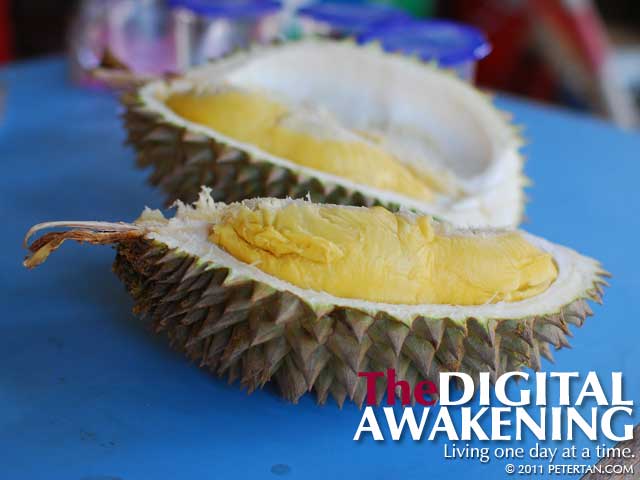 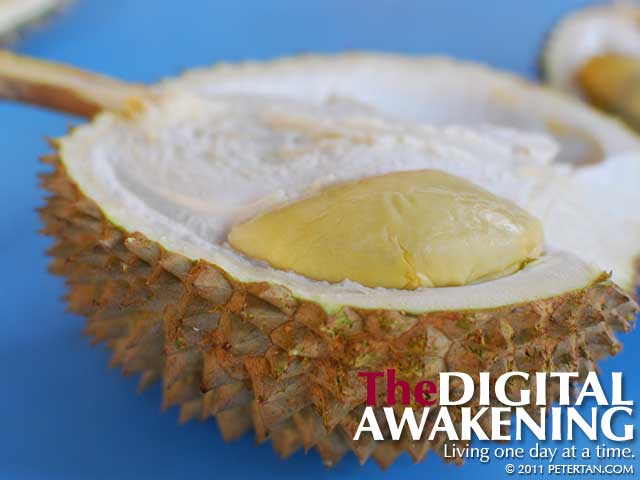 I have forgotten why I was not too fond of Tiam Teng which meant “lighting the lamp”. Wuan liked it very much though. She says the slight bitterness and creaminess was nice. The fruit is roundish. It is difficult to open with bare hands as it has a thick core that the locals call “tua sim”. I have seen people attempting to open such durians with parangs with little success even after mutilating the bottom of the fruit.

As for its name, I can only guess that it was named so because the planters had to wait for it to drop in the thick of the night with an oil lamp to make sure that the fruits do not get stolen. “Ho bak” durians sometimes get stolen as soon as they drop but woe betide the thief who gets caught as the punishment would be ugly and nasty.

Likewise, tourists should not pluck durians from the trees or pick up durians on the roadside along Teluk Bahang, Sungai Pinang and balik Pulau. Plucking the fruit would spoil the tree as it was believed that the fruits would no longer fall even after they are ripe. Picking durians resting on the roaside is considered stealing. Such durians would surely have dropped from someone’s tree waiting to be picked up. 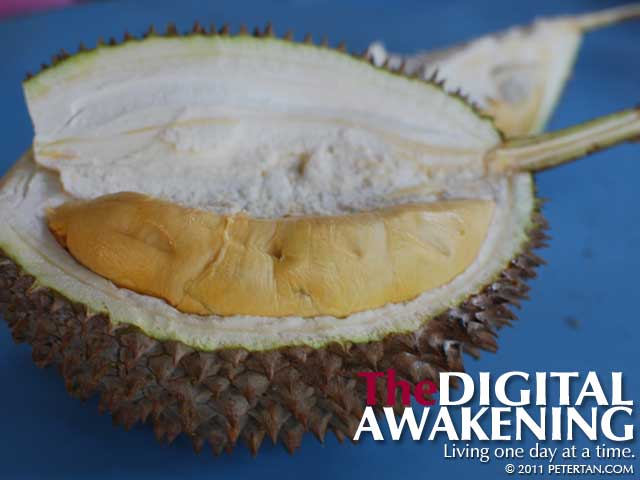 Ang Heh is Hokkien for “red prawn.” It has a mild pleasant aroma, not overly sweet and has a smooth texture. Its flesh has hints of pink and resembles a big prawn, hence its name. I am adding this to my list of favourite durians. If there is a durian that I would recommend to the uninitiated, this would be the one. We wished we could savour a few more durians but we were totally stuffed. Some of my other favourites that I have had there previous times were Ganja (cannabis/marijuana), Susu (milk) and Hor Lor (gourd).