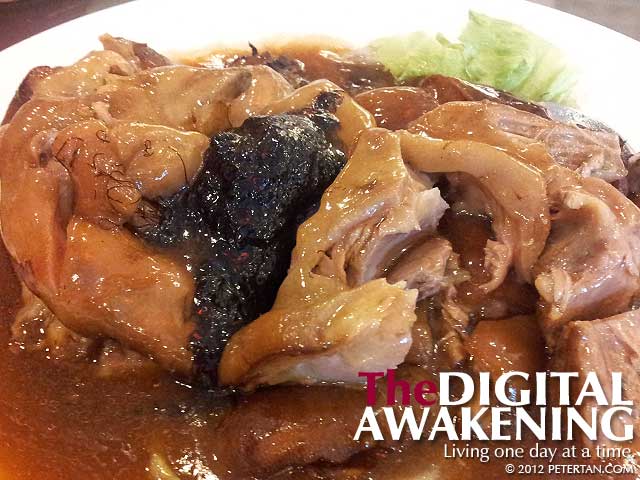 This Chinese New Year is the fourth I celebrated with Wuan’s family in Ipoh. Something is different this year. I was embraced by a sense of belonging, a sense of familiarity, a sense of festivity that I have not experienced in a long time, not since my mother’s death in 2003.

In the subsequent years after her passing, I had consciously chosen not to partake in the celebrations. I was simply too disraught to even think of making merry. Festivals were mostly spent in quiet reflections of the sacrifices she made to ensure that I was never in need.

Although the pain of losing her is still as fresh today as it was seven years ago, I realised that the grieving has to end somewhere for the living to begin. The advent of the new spring is as good a time as can be to start afresh. That was what I did and intend to do from now on. 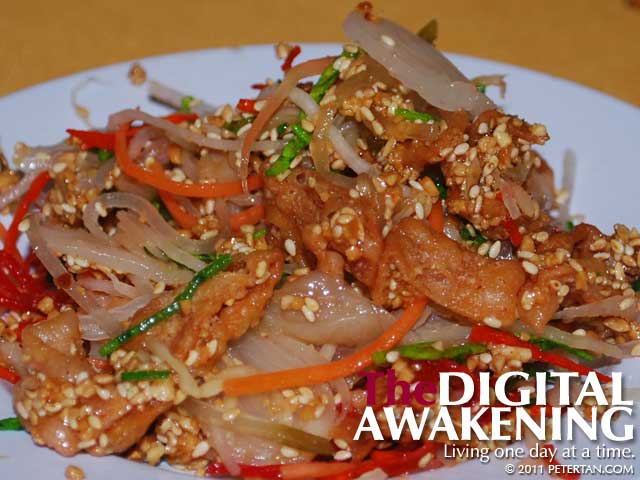 We spent four days in Ipoh, taking along Fei Por and Cheeky with us for their vaccinations and annual check-up at the Ipoh Garden Animal Clinic. As for us, it was feasting, feasting and more feastings. Needless to say, the Chinese New Year season is the most difficult time for me to keep to my low-protein diet. 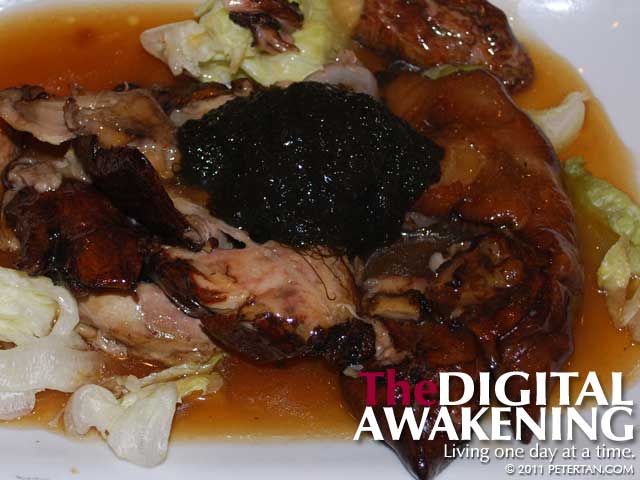 Of all the restaurants we ate at, we liked the food most at the New She Lai Ton Restaurant. We had one half portion of salmon yee sang and three simple dishes as there were only Wuan’s parents and us for that meal. The yee sang came in a very generous serving. We had to confirm with the waitress to be sure it was indeed for us. Of all the yee sang I have eaten this year, this is the best. 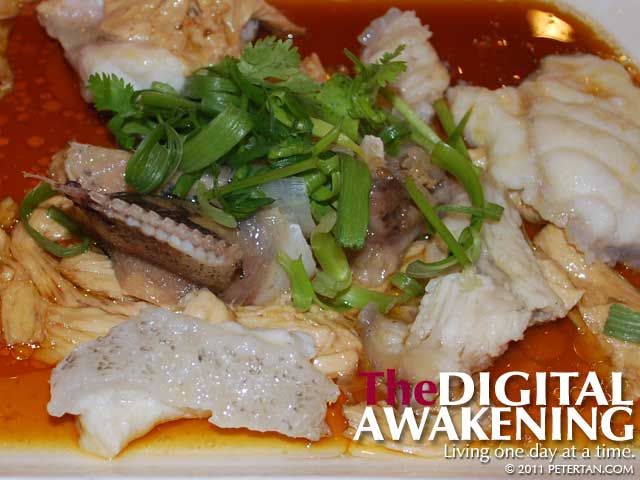 The hung siew pig trotter with black moss was well marinated and tender. I actually had to stop myself from eating too much. Next up was the steamed fish fillet with tau kan (bean curd sheets). It was done just right despite the restaurant being almost full. The stir-fried lai pak with garlic looked deceivingly plain but was tasty. 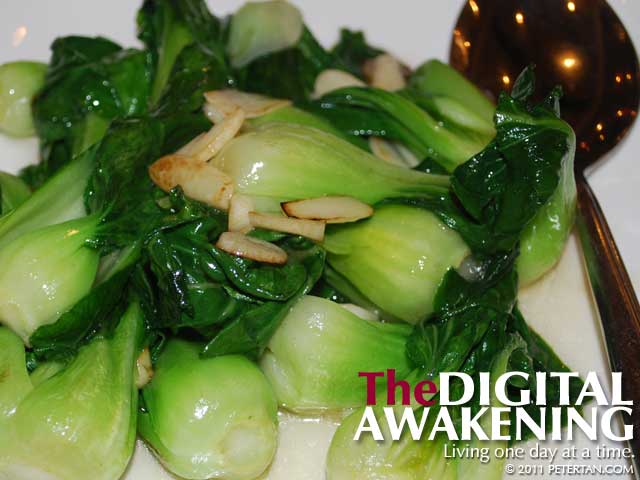 The food was so good that my mother-in-law is already planning the next reunion dinner and new year lunch at this restaurant. Wuan and I certainly do not have any objection. We all left the restaurant with our appetites fully satiated. Most importantly, the restaurant is accessible from the car park. We usually have a hard time selecting a restaurant that I could get into.

The joy of celebrating the Chinese New Year, the rekindling of family ties and the sitting down for a good meal together have all stirred up that warm and fuzzy feeling in me. Finally, after so many years, I have again found the reason to be happy during these auspicious occasions.

As a kid, Chinese New Year meant that I got to wear new clothes and receive the gift of ang paus from uncles, aunties, cousins, neighbours and friends of the family. Mind you, I have very generous relatives. By the end of the celebration on the fifteenth day, I usually would have amassed a small fortune equal to two years’ worth of daily allowance at that time.

But the new clothes and the ang paus were not what I looked forward to most during those occasions. It was the food, an abundance of food that were cooked only during those first few days, that made the Chinese New Year extraordinary. It was only during those few days of festivities that I got to eat some very flavourful Hakka dishes when we celebrate the festivities at my maternal uncle’s house on the second day.

As I write this, I am already salivating at the thought of the aroma and taste of some of those dishes. They were cooked in very large and heavy cast iron kualis on a big cement stove over a wood fire. The smell of smoke from the burning wood mingled freely with the aroma of the food as they were stir-fried or simmered to perfection. If the fire was not hot enough, the flame would be kindled by blowing air into it through a length of bamboo. 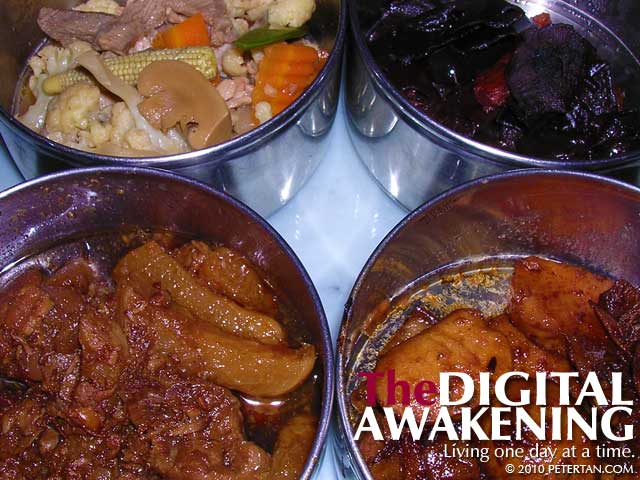 One of my favourite dishes was, still is, pig trotter and sengkuang braised in a gravy of yellow bean paste and spices. The gravy was sourish, sweetish and salty at the same time. I would spoon copious amount of it onto my rice to eat with the tender meat and tasty sengkuang. The other dish that I would dig into heartily was deep fried pork belly in batter of preserved red bean curd dipped in home-made chilli sauce. Heavenly!

Hakka food has a distinct flavour made unique by the pungence of preserved red bean curd. It is used in many of the recipes. Most of the dishes also use a plentiful amount of belly pork. This makes the food rather greasy. Health concerns aside, they tasted good nonetheless with the liberal use of sugar, salt, thick soya sauce and pork lard. As for the last ingredient, cooking oil simply could not replace it to give Hakka dishes that edge in tantalizing my discriminating taste buds honed for decades by relatives who cooked nothing but the best tasting Hakka cuisine.

The were the ubiquitous big bowls of piping hot green pea soup cooked with gizzard to complete the feast. To drink the soup, one had to push aside the layer of oil on the surface with a spoon. If my memory serves me right, I have not had the soup for more than three occasions. I disliked the murkiness, the raw taste of the peas and how they made the texture of the soup coarse to the tongue.

Come to think of it, the photo above was taken in 2004. That has been how long since I have eaten those dishes. I would love to learn the recipes but they have been handed down by word of mouth and hands-on cooking through the generations. The amount of ingredients needed are quantified by the gut feelings of the cook rather than by measuring spoons and weighing scales.

Even if I learn to cook, I cannot possibly finish the food, not even if I share it with Wuan, due to my diet. I guess I will just have to wait until the Chinese New Year season and make my way up to Penang to eat bits of those Hakka dishes that, despite six years of hiatus, are still making my mouth water each time I think of them.