In 2004, I was diagnosed with Stage 3 Chronic Kidney Disease with a serum creatinine of 188 umol/L. At this stage, the kidneys are moderately impaired with decreased function to filter out waste products from the bloodstream. The urologist put me on 1mg Detrusitol twice daily and advised me to continue perform clean intermittent catheterisation (CIC) every four hourly which I have been doing since 1991. That is to reduce the occurence of urine reflux back to the kidneys and damaging them further.

By the following year, my serum creatinine climbed to 262 umol/L and bumped the diagnosis to Stage 4 Chronic Kidney Disease (CKD). I have been living with Stage 4 CKD for the past seven years. At Stage 4, there is advanced kidney damage. It is likely that I will need dialysis or kidney transplant in the future. There are five stages of chronic kidney disease altogether. Stage 5 CKD is known as end stage renal disease (ESRD). This is the final stage of kidney disease where the kidneys have lost almost all their function and dialysis or kidney transplant is needed to live.

I have not thought much about how serious my kidney failure was until recently when I read up more on this disease. At Stage 4, my kidneys are teetering on the brink. Dr. Liong, the urologist at Lam Wah Ee Hospital in Penang, had warned me that life will be difficult not only for me but the family as well should I need to undergo dialysis. It will be a drain on finance and time. Each dialysis treatment costs about RM200.00, requires four hours and has to be performed three times per week. That was the reason he kept reminding to mantain my remaining kidney function as much as possible by catheterising religiously, cut down on protein intake and avoid red meat.

My low-potein diet is basically two matchbox-sized portions of meat per day. I am also to cut down on the intake sodium, phosphorous and purine. High phosphorous level in the bloodstream causes itching. I cut down on the consumption of carbonated drinks, dairy products, peas, beans, nut and chocolates. Purine is metabolised into uric acid. My kidneys are unable to keep the uric acid level optimal. This could lead to gout. To prevent this condition, I avoid spinach, cabbage, cauliflower, organ meats, sardines and mackerels.

Stage 4 CKD is associated with a host of symptoms that I have been experiencing for the last few years. I get exhausted easily because of anemia which is common in people with kidney disease. This condition is exacerbated by the fact that I also have alpha thalassemia trait that causes anemia and small red blood cells. The other apparent symptom is short attention span. This could be the reason why I have been unable to finish the books I have been reading and the lack of updates in this blog lately. I just could not keep my mind focused on one single task long enough to see it to completion.

Chronic kidney disease increases the risk of cardiovascular disease. This is already manifested by my undesirable cholesterol levels that necessitated the long term use of Lipitor to bring my cholesterol under control. The good news is that the electrocardiogram done in November last year did not show any problem with the heart. The other good news is that after a two-month therapy of Lipitor, my cholesterol levels showed marked improvements. At the same time, I did not suffer the potentially kidney-damaging side effects associated with the medicine.

Considering that the sword of Damocles is hanging over my head where my kidneys are concerned, I am quite laid-back about it now as compared to when it was first diagnosed, not that there is much I can do to reverse the condition. I can only slow down the progression of the disease by going for regular check-ups and following the advice of doctors and dieticians.

Of course there were the occasional anxieties, especially just before getting the blood test results or after indulging on more meat that I should. Otherwise, my daily routine is least disrupted. I am determined not to let it affect Wuan’s and my quality of life. It has not so far. My greatest hope is that the kidneys’ current condition will to hold for a long time to come. From the looks of the latest medical reports, there is a good reason for me to be cautiously optimistic. That aside, there is a nagging sense that I will be blindsided by a health condition I least expected, as if a Stage 4 CKD is not bad enough. Hopefully, that is just an overactive imagination working overtime. 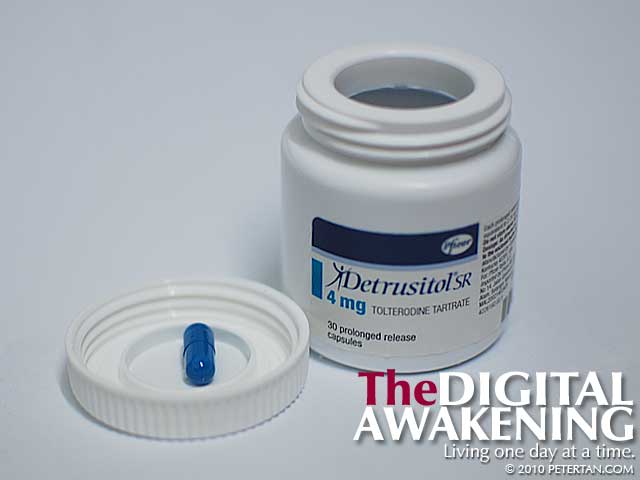 After one year on a twice daily dosage of Detrusitol 2mg tablets, the University Malaya Medical Centre pharmacy has switched me back to the Detrusitol SR 4mg extended release capsules again. For unexplained reasons, the pharmacy stopped dispensing the SR 4mg.

Detrusitol in the prolonged release capsule form is more convenient as I need to take it only once daily. Unlike the previous SR capsules which were packed seven capsules to a blister strip, the current ones come loose in 30s to a small plastic container. The new capsules appear smaller in size too.

I have been taking Detrusitol either in 2mg tablets or 4mg prolonged release capsules since 2004 when I was diagnosed with chronic renal failure. This is to relax my overactive bladder and the frequent urge to urinate, and in turn, reduces the risk of a reflux of urine from the bladder back to the kidneys, which if left unchecked will cause further damage to them.

Wuan accompanied me to the University Malaya Medical Centre (UMMC) yesterday. It was for my scheduled check-up at the Spinal Rehabilitation Clinic. I had been anxious from the time we went there three weeks ago to have my blood drawn for renal profile, blood glucose test and lipid profile. 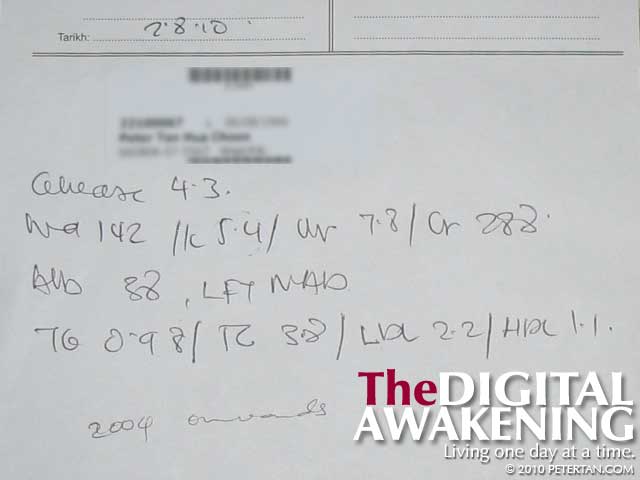 I had half-expected the serum creatinine to be higher than previous results. I have been going through a spell of lethargy that I thought could be due to be caused by my kidneys. It was a great relief when I saw that the serum creatinine was 288 umol/L. No doubt, it was very high due to kidney disease, it has stayed below 300 umol/L. That was all I had been hoping for.

Serum potassium was marginally higher at 5.4 mmol/L. Normal values should be between 3.6 to 5.2 mmol/L. I need to be aware of potassium-rich food that I have to cut down on. Serum urea had come down although still above the desired range, while sodium was hovering at previous levels. Fasting blood glucose looked good. Likewise, lipid profile. Saying that I am happy with the results is an understatement. I am ecstatic!