The Malaysian Bar
Press Release: Time to remove all reservations and sign the Optional Protocols

Thursday, 08 July 2010 03:11pm
The Malaysian Bar welcomes the Government’s ratification of the Convention on the Rights of Persons with Disabilities (CRPD). Alongside Malaysia’s well-publicised ratification, the Government has nonetheless taken reservations to Article 3 on general principles, Article 5 on equality and non-discrimination, Article 15 on freedom from torture or cruel, inhuman or degrading treatment or punishment, Article 18 on liberty of movement and nationality, and Article 30 on participation in cultural life, recreation, leisure and sport.

This means that the Malaysian Government does not fully subscribe to the fundamental principles that persons with disabilities should enjoy such equality, non-discrimination, freedom or liberty, or to fully participate in culture, recreation, leisure and sport. This makes for a hollow ratification since such reservations take away from fundamental principles that underpin CRPD.

These kinds of reservations are consistent with the reservations made to the Convention on the Rights of the Child (CRC), which Malaysia acceded to in 1995. Despite withdrawing reservations to Articles 1, 13 and 15 of CRC, Malaysia still has five reservations in place. These are to Article 2 on non-discrimination; Article 7 on name and nationality; Article 14 on freedom of thought, conscience and religion; Article 28(1)(a) on free and compulsory education at primary level; and Article 37 on torture and deprivation of liberty. This indicates that the Malaysian Government still takes the view that children can be discriminated against, have no right to a name or nationality, have no freedom of thought, conscience and religion, and staggeringly, should not be free from torture and deprivation of liberty.

The Malaysian Bar also welcome the Government’s withdrawal of reservations to Articles 5(a), 7(b) and 16(2) of the Convention on the Elimination of All Forms of Discrimination Against Women (CEDAW). While noteworthy strides have been made in terms of efforts to eliminate discrimination against women, Malaysia also still has five reservations in place with respect to CEDAW. These deal with equal rights for women to pass their nationality to their children (Article 9(2)); equal rights to enter into marriage (Article 16(1)(a)); equal rights and responsibilities during marriage and at its dissolution (Article 16(1)(c)); equal rights and responsibilities with regard to guardianship, wardship, trusteeship and adoption of children (Article 16(1)(f)); and the same personal rights in a marriage, including the right to choose a family name, a profession and an occupation (Article 16(1)(g)).

In addition to these reservations, the Malaysian Government has still not signed or ratified any of the Optional Protocols to CRPD, CRC or CEDAW. These Optional Protocols grant specific rights to the citizens/residents of a country to refer their government to the international supervisory committee for non-compliance with each of these conventions. At present, although Malaysia is a State Party to these conventions, Malaysians cannot hold the Government accountable if it does not honour or comply with their provisions.

Similarly, the Persons With Disabilities Act 2008, which supposedly implemented the provisions of CRPD and which came into force in July 2008, does not provide for any form of punishment or remedy for breaches. It remains to be seen how the Malaysian Government will ensure that provisions of that Act are implemented. The Act also does not ensure that the persons with disabilities are not discriminated against, e.g. in education and employment opportunities.

The ratification of CRPD, and the withdrawal of some of the reservations to CRC and CEDAW, are all positive steps. However, more can, and should, be done.

We call on the Malaysian Government to give full effect to its international obligations by removing all remaining reservations, and by signing all three Optional Protocols. It should also expand the scope of the existing Child Act 2001 and Persons With Disabilities Act 2008 to comprehensively cover all areas of CRC and CRPD respectively. Currently, many of the provisions of CRC and CRPD have been left out of the enabling Malaysian legislation. 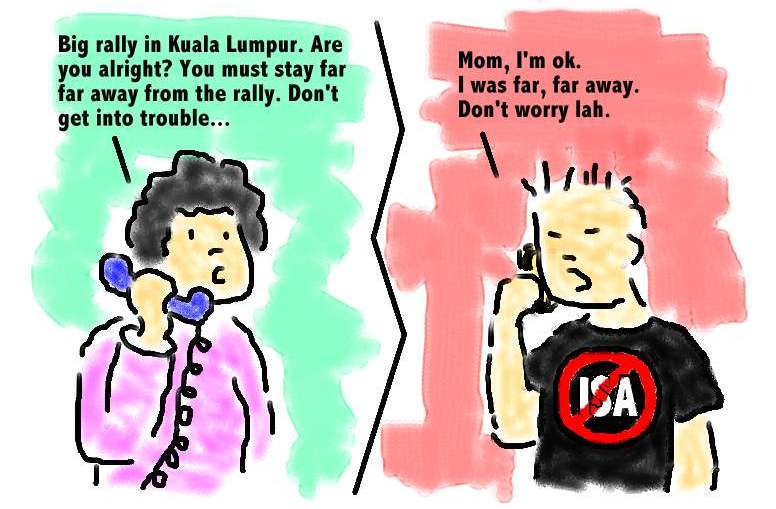 My good friend Kuan Aw has a “cartoon blog about life in Malaysia.” These cartoons are on current issues. They are satirical yet relevant. Do check out Draw 3 Draw 4 for a slice of kopitiam talk from the viewpoint of a man who is just a few years older than the country itself.

Thanks to Lilei Chow who forwarded news articles on Malaysia becoming the latest signatory to the United Nations Convention on the Right of Persons with Disabilities (CRPD). Malaysia signed the convention on April 8, 2008. This is a milestone in the disability movement in our country.

However, the same news articles did not mention if Malaysia also signed the Optional Protocol to the Convention on the Rights of Persons with Disabilities and whether Malaysia had reservations towards some of the articles in the CRPD. The Optional Protocol enables individuals whose rights are violated to seek redress from the Committee of Persons with Disabilities after exhausting all the remedies of national laws.

The United Nations Enable page on Convention and Protocol Signatories and Ratification listed Malaysia as having only signed the Convention. The government should show its full commitment by also signing the Protocol and at the same time ratify the Convention soonest possible.

At the same time, the government should also consider drawing up an anti-discrimination law to protect the rights of disabled people. The Persons With Disabilities Bill is non-punitive and therefore toothless. The Uniform Building By-Law 34-A (UBBL 34A) under the Streets, Drainage and Buildings Act must also be strictly enforced to ensure that all public buildings are fully accessible. It is high time the By-Law includes external environment as it currently does not require that those places be accessible to disabled people.

The UBBL 34A is a good example of how the rights of disabled people are not not being protected by a piece of legislation that has been in existence since the mid-90s. The government has had fifteen years to do what is required in the By-Law but they have done little. Therefore I wonder how the Persons with Disabilitie Bill will be any different when past laws have proven otherwise.

Nevertheless, having signed the Convention, the government should now get down to implementing the policies on disabilities to ensure that disabled people are accorded their equal and rightful place in society. Policies that discriminates should be removed with immediate effect. Infrastructure in the forms of public transport and built environment should be made accessible to all.

The government can begin by ensuring that RapidKL, Rapid Penang, Star LRT and all government facilities are accessible to disabled people within a fixed time frame. The other issues that must be looked into are education, employment and the provision of independent living support to people with severe disabilities. Are we up to it? Time will tell. Until then, I am reservedly optimistic. I have experienced too many empty promises and poorly enforced legislation to believe that things will change for the better any time soon.

NEW YORK: Malaysia has signed the Convention on the Rights of Persons with Disabilities at the United Nations headquarters here.

The Malaysian Government was represented by Datuk Faizah Mohd Tahir, Secretary General of the Ministry of Women, Family and Community Development, said a statement issued by her entourage.

The Convention entitles the disabled to the full enjoyment of all human rights and ensures full and effective participation as well as inclusion in society, on an equal basis with others.

The eight general principles of the Convention are:

Malaysia Signs UN Treaty On Rights Of Persons With Disabilities

KUALA LUMPUR, April 9 (Bernama) — Malaysia is now a signatory to the Convention on the Rights of Persons with Disabilities, a treaty that upholds and safeguards the rights of people with disabilities to be independent and to live with dignity and respect.

According to a statement from the ministry, the signing of the convention was witnessed by UN’s Office of Legal Affairs’ Chief of Treaty Section Annebeth Rosenboom, Malaysia’s Counsellor in New York Raja Nurshirwan Zainal Abidin and Director of National Population and Family Development Aminah Abdul Rahman.

The long-awaited convention underlines eight general principles which include respect for inherent dignity and individual autonomy, non-discrimination, full and effective participation and inclusion in society, respect for difference, and acceptance of persons with disabilities as part of human diversity and humanity.

The statement said the signing of the convention showed the government’s concern and commitment following the formulation of the Policy on Persons with Disabilities and its plan of action.