To photographers, rechargeable batteries are as important as the photographic gear itself. These batteries power the cameras and flash guns. The common types are Lithium-ion (Li-ion) and Nickle Metal Hydride (NiMH). Li-ion are usually proprietary batteries manufactured for specific models of cameras only. NiMH on the other hand can be used on cameras that accepts AA-sized batteries which includes many compact cameras. 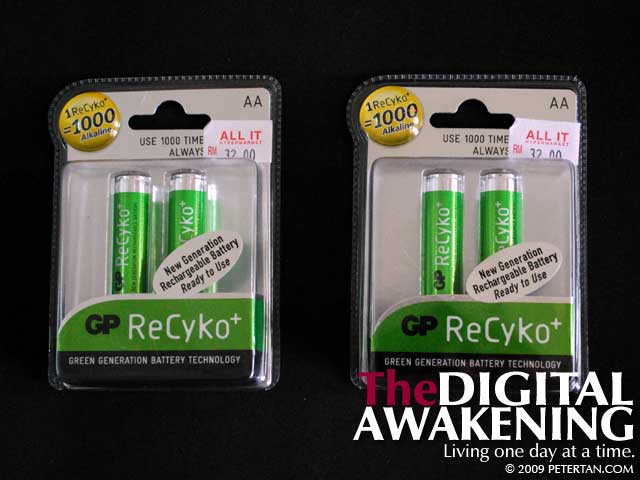 I have been using AA-sized NiMH batteries since 2003 when I bought my first digital camera. NiMH those days were unreliable. The power of some would be exhausted after only fifty or sixty shots fresh from the charger. The other disadvantage about these batteries is that they have poor power retention. Their power will be totally exhausted in about one week. That was the reason why I carry a pack of alkaline batteries for those “just in case” moments. Comparartively, alkalines are single use and expensive. 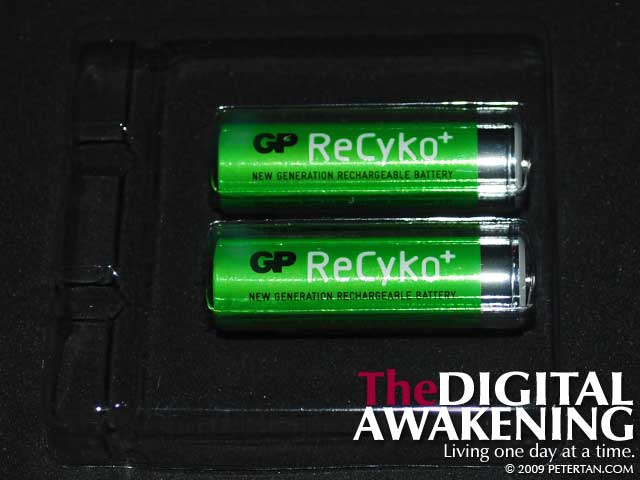 The older generation of NiMH batteries come uncharged. The new generation comes pre-charged. These include Sony Cycle Energy, Sanyo Eneloop and GP Recyko+. I have been using a set of four Sanyo Eneloop AA-sized batteries on my Canon Powershot A610 for two years now. Wuan has been using hers for the Canon Powershot A90 close to three years already. Both sets still retain their charge well after a few weeks. 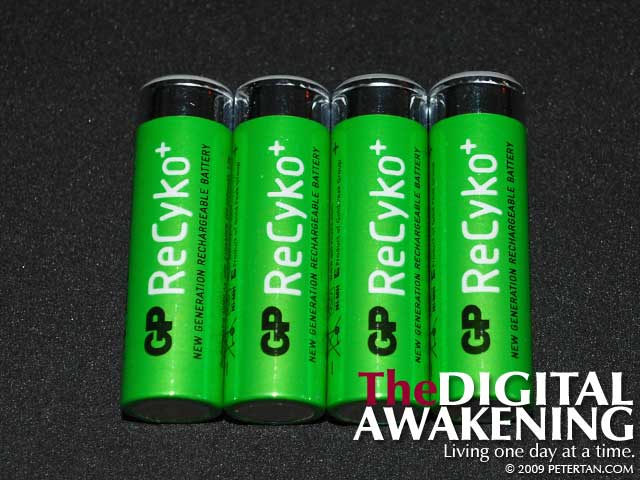 Recently, I got the Nikon Speedlight SB-600 for the Nikon D60. The flash unit takes four AA-sized batteries. Wuan has been taking the Eneloop from my A610 to use in the SB-600. It is a hassle as when I need to use the compact camera, I have to retrieve it from the flash and put it back into the A610. When we were at Low Yat Plaza recently, I got I bought 2 packs of 2 AA-sized GP Recyko+ pre-charged batteries to be used for the SB-600. 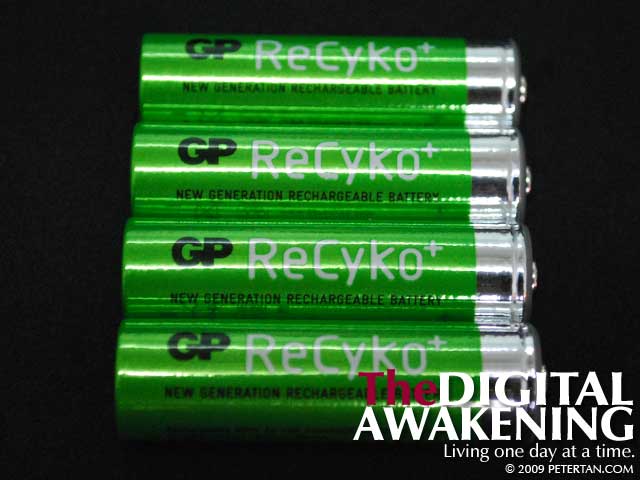 One pack of 2 batteries cost RM32. The batteries come with a charger too but that costs RM88 per set and comes with four batteries. It is actually quite a bargain as I had previously paid RM150 for a charger only. However, I have 2 units of chargers that are still in working order. Over the next few weeks, I am going to test the Recyko+ to see if they are as reliable as the Eneloop. 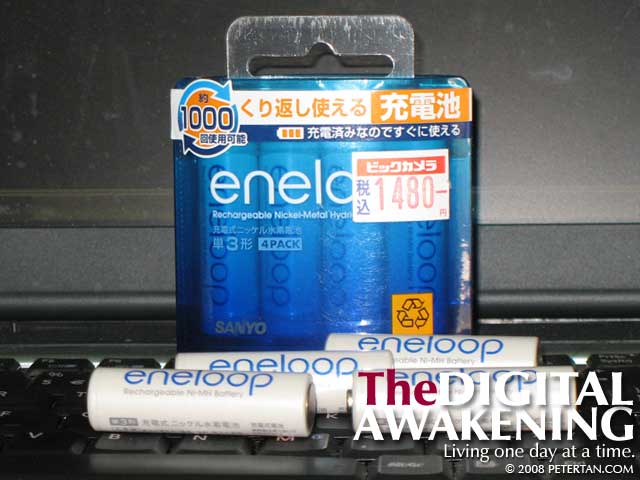 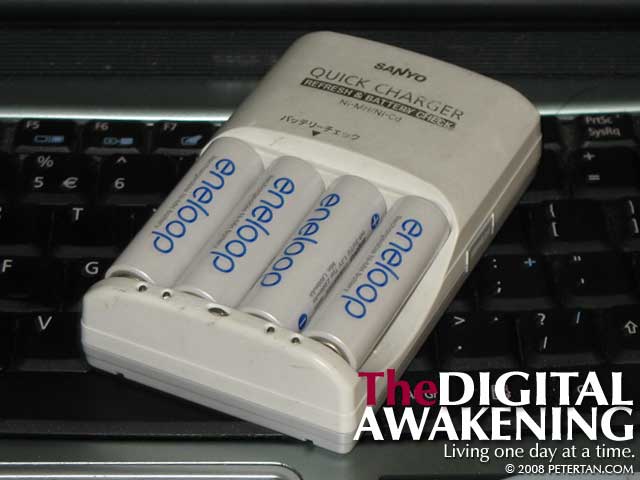 The week that just passed was a hectic one. Wuan accompanied me to the Peer Counseling Workshop at Institut Latihan Majlis Kebajikan dan Pembangunan Masyarakat Kebangsaan Malaysia (MAKPEM) in Sentul. This workshop was organised by Jabatan Kebajikan Masyarakat Malaysia (JKMM) and Japan International Cooperation Agency (JICA). The workshop began on Monday and ended on Thursday. I was only able to attend the workshop from Tuesday onwards as Wuan was not around. She went back to Ipoh for a short holiday. 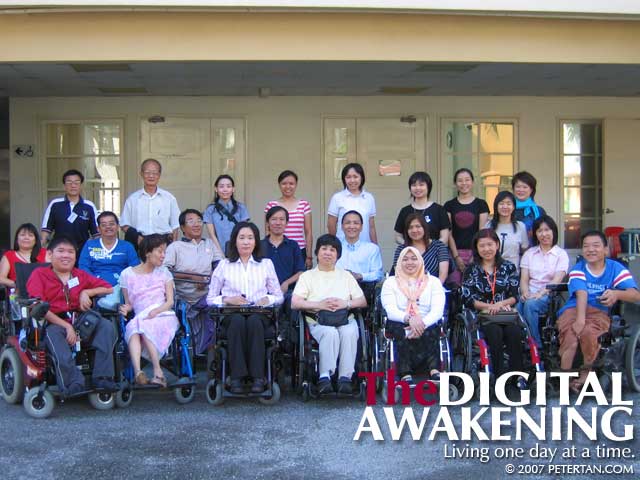 It was good meeting Hiroko Akiyama and Aiko Tsutsumi again. They were invited a resource persons for the workshop. Hiro and Aichan, as they would prefer to be known, were here in 2005 to conduct the Independent Living Workshop. Hiro and I have met several times in Tokyo, Bangkok and here in Malaysia for related activities. This was Aichan’s second trip to Malaysia.

When I was in Tokyo, Aichan had taken me to the Odakyu Department Store in Shinjuku to purchase a pair of adaptive chopsticks called the hashizokun. It was already worn out and I needed another pair desperately to enjoy my bak kut teh and noodles. When Adriene was back for a holiday recently, I had asked her to get another pair for me. Adriene is currently pursuing her post-graduate studies at the Sophia University in Tokyo.

After much coordinating between Hata, AiChan and Adriene in Tokyo, I finally got a new pair of hashizokun that Adriene managed to buy and passed through Aichan to me. Adriene also got me 2 sets of 4 Sanyo Eneloop batteries each. I just realised that these batteries are available in Malaysia already although much more expensive as compared to the price in Japan. 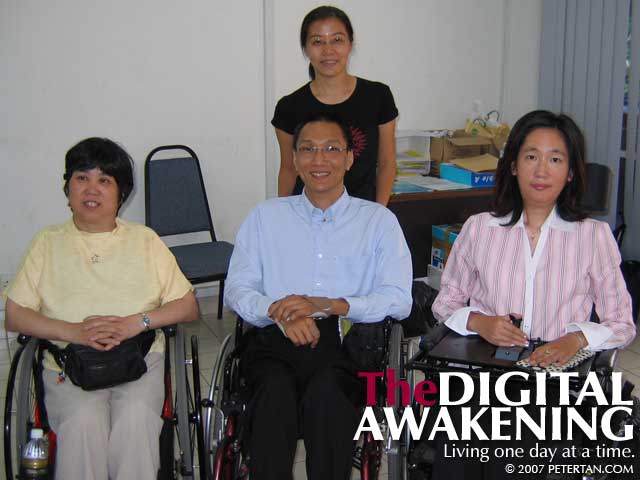 The workshop was also a good opportunity to catch up with the latest from friends from Malaysia that I seldom get the opportunity to meet like Siti, Elaine and Say Leng, and also make new friends. Although I was one of the local resource persons and conducted one of the sessions, it was still a learning process for me just like some of the newcomers. There is much to learn about Independent Living and Peer Counseling.

The dream of setting up a Centre for Independent Living in Malaysia has not materialised yet. Unfortunately JICA’s 3-year programme for Independent Living here will conclude by the middle of next year. There is an urgent need now to tap into JICA’s resources to realise this dream of liberating severely disabled Malaysians as the programme enters into the final phase. Can we make it before the programme ends? All I can say is that I will try my level best. The rest, I leave it up to God to show me the way.