The Jabatan Kebajikan Masyarakat (JKM), through the Japan International Cooperation Agency (JICA), invited me to conduct a Disability Equality Training (DET) session titled “What is Disability?” in Kuching, Sarawak. This was in conjunction with the Sarawak State Level 2012 Seminar on Supported Employment for Disabled People.

Knowing that I would need to be accompanied on overnight trips, JICA arranged to cover the return flight tickets and hotel accommodation for Wuan and I. It was a busy period at work for Wuan and she could not take leave to go with me.

Coincidentally, I met Victor Chin during the Kuala Lumpur Photography Festival 2012 at the time when I was looking for someone to accompany me. Victor, a renowned artist and photographer, is a good friend who had roped us in to hold a joint photography exhibition with him in 2009. I asked and he agreed to accompany me to Sarawak for the seminar.

Still, I was hesitant because that would be the first time I would be travelling with an expensive rigid wheelchair. I was afraid the wheelchair could be damaged by mishandling of the cargo handlers. I checked around but could not get insurance specifically to cover damage or loss of the wheelchair for the duration of the trip.

Having already committed to the seminar, I steeled my nerves and prayed nothing untoward would happen to the wheelchair; else I would be stranded in a land far away from home. Then, there was the uncertainty of whether I needed a passport.

There was virtually no information on the documents required of Malaysians from the peninsular entering Sarawak in official government websites. Friends in the know informed me that all that was needed is my identity card. I should have asked JKM or JICA regarding this in the first place.

I have not been to Kuching before but I have a few friends who are from there. We got acquainted online through our blogs. We agreed to meet but since I had no idea of my schedule yet, we could not arrange for a specific time to meet up. Nevertheless, I was excited at being able to finally meet them face to face after so many years of communication through our blogs and then Facebook.

I am no stranger to travelling by plane. There was a time between 2005 and 2007 when I commuted frequently between Penang and Kuala Lumpur and to other places by flight. It was the most convenient way for me to travel between the two cities since express buses and trains were not that accessible.

I will be travelling again in a couple of days but there is this nagging fear that has been bothering me. This will be the first time I am flying with my Tilite ZRA S2 wheelchair. Having had first-hand experience of having my wheelchair irreparably damaged during one of my trips in 2005, I am worried my wheelchair may be mishandled again.

While Malaysia Airlines compensated me fully for the damaged wheelchair due to the collective complaints from other bloggers, the process of getting a replacement while using the damaged chair was very inconvenient. The wheelchair that I used at that time was a standard lightweight wheelchair that was available in most shops selling rehabilitation equipment. The one I am using now is ultra lightweight, fully customised and handmade in the USA, and costs ten times as much.

Malaysia Airlines recommends that passengers purchase additional baggage insurance to cover loss or damage of valuable and important documents. The Tilite is a vital piece of hardware that I cannot do without. My very mobility and independence depend on it. It is as valuable as anything else can be to me.

MHInsure, the company providing travel insurance to Malaysia Airlines passengers, do not provide cover for specific items other than the three fixed insurance plans that they offer. The highest compensation for damaged or lost baggage is RM3,000. That is less than a quarter of the cost of my wheelchair.

Should the wheelchair frame or any of the parts become damaged, replacing them will be expensive, not to mention that it may take two weeks or more for the parts to arrive from the USA, and severely restrict my mobility for that duration.

It is no fun going on a trip and having to worry what the condition the wheelchair will be when it comes out from the cargo hold. Having a totalled wheelchair in a foreign land will be very devastating for the disabled person. The problem of being stranded may cascade into serious health problems such as pressure sores.

Airlines or the parties providing baggage handling services should train their staff to be more careful when moving wheelchairs. I pray the baggage handlers will be kind to my wheelchair on this trip and all my other upcoming trips.

My first wheelchair was an Everest & Jennings. At RM1,800, it cost as much as a Honda C70 motorcycle then. It was foldable with full reclining back, removable full support headrest, detachable armrests, and removable and elevating legrests. It was heavy like a tank and handled like one. My weak hands made it even more difficult to propel. I yearned for a smaller and lighter wheelchair.

Over the next two decades, I went through three standard folding wheelchairs with detachable armrest and footrests. In between that, I also had an Etac, a rigid frame wheelchair that was one size too small. I moved on to my first customised folding wheelchair in 2007. The Max Pleasure Synergy set me back more than RM5,000. Unfortunately, the axle broke just after three years.

Fed up with having to repair broken axles and other parts of wheelchair frames every now and then, I decided that I wanted a rigid wheelchair. With less moving parts, there are less probabilities of parts breaking down. Compared with folding wheelchairs, a rigid wheelchair has less flex of the frame. This translates to a more efficient push. I narrowed the search down to the Tilite ZRA Series 2 which is an ultralight rigid titanium wheelchair. As it would be custom-built, precise measurements were needed. It was also to be the most expensive I had ever paid for a wheelchair.

I did extensive research on getting the right measurements and accessories, mostly at the CareCure Community, a forum for people living with spinal cord injury. After an exhaustive two-month of reading up on the experience of people using similar wheelchairs, asking questions and getting good advice and suggestions, I felt that I was ready and placed my order with Bike-On, an online store dealing in wheelchairs and handcycles.

The following are the final measurements for the wheelchair: 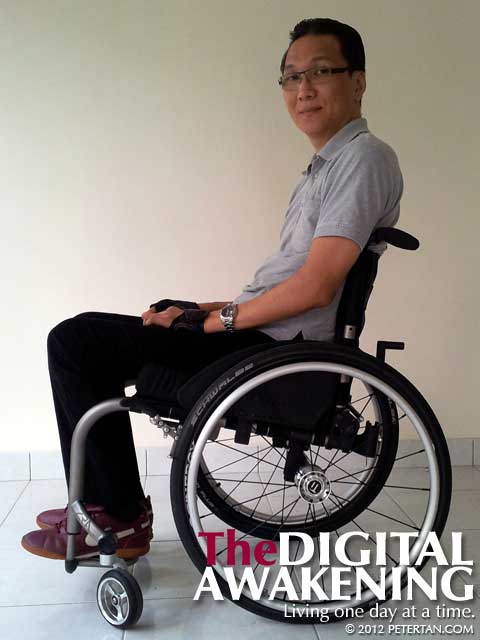 I have used the Tilite ZRA Series 2 for slightly more than one year now. The measurements for the wheelchair were almost perfect and needed no adjustment when I took delivery of it. Credit must certainly go to the members of Care Cure Community Forum who gave valuable feedback and comments. Having said that, I also understand better now how the wheelchair can be further fine tuned for an even better fit.

My posture has improved termendously. My feet sit flat on the footrest although I now would prefer the footrest to be positioned further forward at 80 degrees instead of the current 85 degrees. Being tucked in like that is causing poor circulation and edema of the feet. Otherwise, the positioning of my legs and feet have reduced occurrences of spasms. (SCI_OTR has since advised that increasing the seat depth from 17″ to 18″ while maintaining the front angle at 85 degrees would give the same result of having my feet further forward as an 80 degree front agle.)

The folding backrest had some play to it when upright. The locking stud on the left kept coming loose and had to be tightened often. One of the pins in the folding mechanism also kept slipping out. This was a known fault of the ZRA Series 2. Tilite redesigned the mechanism to resolve the issues. I requested for a replacement through Bike-On. It was delivered via UPS several weeks later. A big thumbs up to Tilite and Bike-On for this painless process.

The first few months using the Tilite standard forks and plastic front casters gave me a bumpy and uncomfortable ride. I could even feel the bumps while rolling across the thin gaps of tiled floors. The ride became significantly smoother after the forks and casters were replaced with Frog Legs Uni Tines and aluminium Epic soft roll casters. Besides, hair that used to get wound round the axles were drastically reduced.

Other than the position of the footrest that I would like changed, I am also considering a rigid backrest, rigid seat pan and the Q-Grip handrims. The rigid backrest and seat pan could provide better support and at the same time further improve my posture. However, I need to add an extra inch to the seat depth to accommodate the rigid backrest which means I cannot install it on my current wheelchair. The Q-Grip handrims are coated with non-slip neoprene. This will allow me to push the wheelchair more efficiently which my weak hands cannot do with the current anodised handrims. I plan to have these upgrades for my next wheelchair.

All said, I have no regret whatsoever in forking out the amount I paid for the Tilite ZRA Series 2, it being the most important piece of equipment for my mobility and independence. In fact, I wished I had gotten one earlier. I have nothing but praises for the ZRA for its full adjustability, not that I have had the need to adjust anything. The best thing about this wheelchair is that I look good in it. This is my best wheelchair yet and the rigid frame is the only way for me now.